The Race For First

Posted on September 6, 2012 by portertinsley

10:30 a.m. – after a leisurely morning of coffee, eggs and work email, I got into the Jeep and headed north from the town of Sedona to Slide Rock, a wonderful little creek in a rock canyon that provides a natural waterslide.

It was cloudy that morning, overcast from the series of monsoons that had been pummeling Sedona that entire week. Of course, it was cloudy until I got to where I needed to be. Then the near-noon sun burned down upon me along with a 15 degree increase in temperature, making my skin, and my blood, boil.

Lesson? Get the fuck up early to go get your shot. Not only was my shot impossible due to the high contrast of the sun, but it was as busy as a waterslide park at Slide Rock. Because, duh, it IS a waterslide park. Kids everywhere. It didn’t help that I took the wrong trail to the creek, I went up instead of down. To the water. In my sack I was carrying every lens I had PLUS a 20 pound tripod. It was this trip that I decided I was going to go buy a new one. I made the best of it, I went north to where the monsoon was – past Flagstaff. Those shots coming in another blog.

When I went back the next day to Slide Rock, I was the third car in the gate when they opened (at EIGHT O’CLOCK. Losers.) I grabbed my gear and hustled to the creek. I had about 10-15 minutes to myself before the first people showed up. These are my shots. 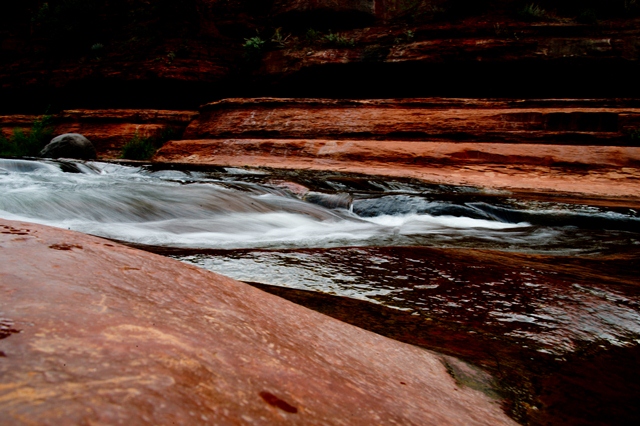 1 Response to The Race For First